Posted on January 8, 2011 by Stephanie Biondi

Producing wine often provides rewards that can sometimes make up for the often meagre financial return.  An example of this came by way of an invitation from Alex Burge to visit probably one of the most beautiful houses in Taormina.  Alex is overseas sales director for Andrea Franchetti, who has vineyards in Passopisciaro, here on Etna, and whilst living with his family in Aci Trezza during the ’80’s, was a companion of Ciro’s .  Although their paths had not crossed for many years, Etna and her wine were destined to bring them together once again.  Whilst chatting with him at Vinitaly in April 2010, I casually asked Alex how his English father and Dutch mother had met.  I was staggered to hear that they had been introduced to each another by one Daphne Phelps, from England who had lived at Casa Cuseni, Taormina.   A few years ago, thinking it would be of interest to me, my father had sent her Obituary which had been published in the Daily Telegraph.  I read it with avid interest, as not only had she attended the same boarding school as I had in Suffolk, but she had also chosen to make Sicily her home at a considerably more ‘challenging’ period than I had.  After reading her obituary, I decided to embark upon a more in depth research,  and found that her Uncle, Robert Kitson, had first visited Taormina in 1898 at the age of 26.  He knew at once that he had ‘found his place of destiny’,  as being homosexual,  he felt that he was able to create his own world there, and after briefly returning to England, he immediately returned to settle in Sicily and embarked on the construction of Casa Cuseni in 1905.  After his death in 1947,  Daphne was sent to Sicily by the family to settle his affairs and sell the house,  but upon her arrival she immediately fell in love with the house and its extensive gardens, and decided to stay on until her death in 2005.  When Ciro, Alex and I arrived at Casa Cuseni, we were met at the gate by Franco, the son-in-law of Daphne’s long-term housekeeper, Concetta, who had died the previous year, and cautiously made our way up the slippery narrow path through a tangle of jasmine and mandarin trees to the house and climbed the steps to the extensive front terrace, where we were greeted  by Mimma, Concetta’s daughter.   Concetta and her family had lived on the premises since Daphne had kindly given them shelter in the house at the garden gate after their house in ‘campagna’ had been destroyed by lightening.  Alex and Mimma embraced fondly as she welcomed us to the house and Alex back ‘home’ introducing us to her daughter, named Daphne, after the ‘Signorina’.  It was a beautiful day,  and with a welcoming, brilliant shaft of sun light falling on to the oak floor, we walked through the large double doors leading from the front terrace into what was an essentially English large drawing-room .  Gazing around in reverential delight, I  noticed to my right,  a door opening on to what had been Robert Kitson’s book-lined study, with a further door leading onto the once beautiful garden.

After a lengthy discussion between Alex, Mimma and Franco about the state of the house and the unsuccessful attempt by Daphne’s nieces and nephews to sell the property, despite a failed attempt at a project to restore both the house and gardens, which were in themselves a horticulturist’s delight, Alex showed us around the remainder of the house,  which included Daphne’s own bedroom and the guest rooms which had been occupied by a stream of paying guests such as Bertrand Russell, Roald Dahl, and Tennesee Williams. We were then shown the converted rooms on the top terrace where he had slept as a child on the regular occasions he would visit with his parents.  The rooms were furnished as they had always been, the dining room heralding a harmonious mixture of art nouveau and Sicilian styles with a mural painted by Frank Brangwyn, who had also designed the panelling, table, sideboard and chairs.

Franco kindly searched for the guest books, in which we found Alex’s signature, written in a bold four-year old hand from 1969.

As there do not seem to be many prospective buyers on the horizon, and saddened to see the house descend into even more disrepair,  Mimma and her husband very much hope that a buyer will  appear to save Casa Cuseni, thus continuing a legacy of which they have played a very important part.  Both Ciro and I wish them all the very best and will do every thing we can to support and help them in their crusade to maintain the dream of ‘Don Roberto’ and la Signorina, who lie side by side in the cemetery in Taormina. 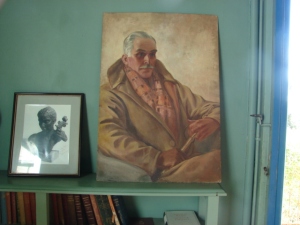 Brought up in Nigeria and sent to Boarding School in England. Has been in Sicily since '91 teaching English and producing award winning wines on Mt Etna with her husband Ciro Biondi since their first vintage in '99.
View all posts by Stephanie Biondi →
This entry was posted in Uncategorized. Bookmark the permalink.